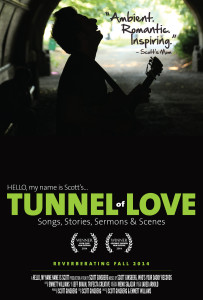 Tunnel of Love is a feature length concert documentary about the intersection of identity, belonging and creativity.

It’s a look at the transformative power of live music, both on the audience and the performer. It’s an homage the sonic potential of natural acoustics. And it’s a playful narrative about two lovers in the process of changing their pronouns.

Through live performances, unexpected creative moments of conception and behind the scenes storytelling, the film takes you on a heartfelt journey about what it means to be an artist, a romantic and an opportunist.

The movie was filmed at The Meadowport Arch in Prospect Park, Brooklyn. It’s the most breathtaking architectural and sonic marvel ever.


Watch the trailer.
Meet the creators.
Go behind the scenes.
See the episode schedule.