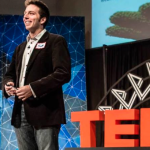 Scott Ginsberg — Writer, Producer, Director
Since 1999, Scott has released six albums on his own record label, authored 27 books, published an award winning blog, given a TEDx talk and delivered over 600 presentations and corporate training programs worldwide. He’s the only person in the world who wears a nametag 24-7. Even to bed. Simply google the word nametag, and you’ll see his work benchmarked as a case study on human interaction, revolutionizing the way people look at approachability, identity and commitment. He was also inducted into Ripley’s Believe It Or Not with the rest of the freaks.

Scott other work can be found at www.nametagscott.com. 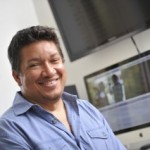 Emmet Williams — Director, Editor, Videographer
Award winning artist Emmett Williams founded Mission Man Media with the idea of telling stories in ways that have not been told before. As an internationally known musician, nationally exhibited photographer, and published writer, Emmett has made a career out of seeing things in a different way, while making his art accessible to a wide audience. After many years producing and writing for television, he is making the switch to tell his stories using compelling and entertaining feature-length documentaries.

Emmett’s other work can be found at www.missionmanmedia.com