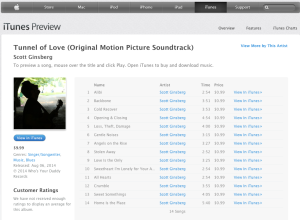 The original motion picture soundtrack is now available for downloading and streaming. This album will give you a taste of the audio magic we experienced that night in the tunnel.

Since the sonic landscape was such a unique recording experience, I decided to interview my audio engineer, Jared Arnold, about his equipment, process and philosophy. He responded to my gig request on Elance and was an absolute pleasure to work with. We had a blast in the studio geeking out over beautiful moments of audio production value, i.e., police sirens, kids on bicycles and dogs barking during the concert.

1. What were the different types of microphones you used in the tunnel? Why did you choose that equipment?

We used three microphones in tunnel. First, a Sennheiser ME-2 Lavaliere Mic. This was chosen to capture Scott’s voice consistently while giving him freedom of movement, as it’s wireless and tiny. Second, a Shure SM7B Dynamic Mic. A great all around dynamic mic that I like on guitars. I chose it to make sure it could handle Scott’s loud guitar strumming while also capturing the intricacies of his playing. Fun fact: Michael Jackson’s vocals on Thriller were recorded with the same equipment. And third, a Sony PCM D-50 Stereo Field Recorder. That mic was set up in the distance to capture the entire sound field, and in particular the reverberation in the tunnel. Having that microphone allowed us to control the level of natural reverberation that we’d include in the final recording.

2. What program did you use for editing the master?

I used Logic Pro X to edit, mix, and master the tracks. It’s my digital audio workstation of choice.

3. Can you talk about your experience recording this album in the tunnel?

I really enjoyed recording inside the tunnel. Living in the vicinity of Prospect Park, it’s always been a spot that interests me. Whenever I pass through one the tunnel, I snap my fingers or yell just to hear the unique echo. Naturally, I was excited when I heard about Scott’s project. Tunnel of Love is definitely the most interesting location at which I’ve ever recorded a concert. I’m so used to minimizing ambient sound while recording––whether that’s putting up acoustic paneling to deaden a recording room, or simply waiting for the neighbors to stop vacuuming––so it was a nice change to incorporate that sound into a recording on purpose.

4. How did you balance the different ambient tunnel sounds?

The album’s ambient sound came in two parts. First and foremost, there was the natural reverberation of the tunnel itself. But we also captured the sound of the audience applauding and participating, as well as the sound of pedestrians on foot and bikes. I’m glad that we agreed upon a naturalistic approach and worked all of this into album, it truly captures the spirit of the event.